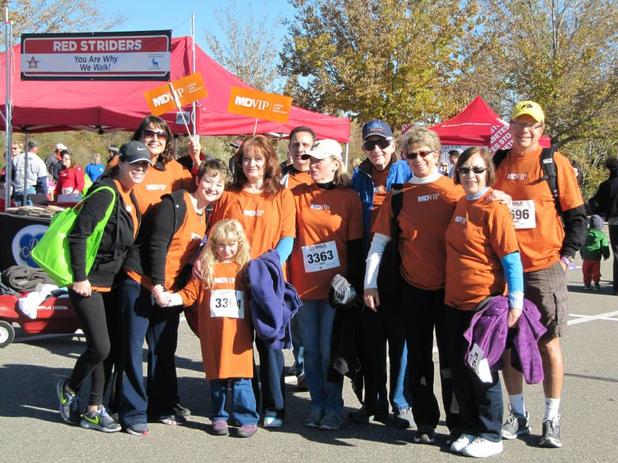 From the misty forests of Washington, over the mile-high mountains of Denver, through the Saint Louis Gateway Arch and across the sandy beaches of Florida, Team MDVIP marched throughout the country in support of Step Out: Walk to Stop Diabetes, American Diabetes Association’s signature fundraising walk late last fall.

Eleven teams representing MDVIP – with a total of 202 team members – were part of the nationwide event held in cities throughout the United States that raised more than $24 million to help find a cure for diabetes.

“We are very proud of Team MDVIP – more like ‘Family MDVIP’ – for working together to fundraise and create awareness for diabetes,” said Chris Lillich, Chief Marketing Officer at MDVIP. “This year we raised $7,938 – 60% more than last year. In the past 2 years, we’ve raised a total of $12,938 for this wonderful cause.”

Walking teams from around the country were made up not only of medical staff, but also family, friends and supporters to help with the fundraising. Event day in each city was a fun way for participants to celebrate how much they raised to promote awareness about the American Diabetes Association.

“We are so pleased with how our MDVIP participation has grown,” said Chris Lillich. “We are thankful to all of our team members – and the people who supported them with donations and with their positive thoughts.”

“This year, our MDVIP participation nearly quadrupled to more than 200 walkers, which is so very exciting for all of us here at MDVIP.”

MDVIP Team members joined in the walk for a variety of reasons, from those who help people with diabetes every day to those whose life has been impacted by the condition.

“I treat countless patients all day long who are affected by diabetes,” said Dr. Larry Gassner, MD.  “All of these efforts will help benefit patients like mine so they can live a healthier and happier life.”

No matter what the reason, how much was raised or how many people joined in, all of those who dedicated their time and efforts to the walk were much appreciated by MDVIP.

To see photos of some of Team MDVIP in action, visit our MDVIP Facebook photo album.