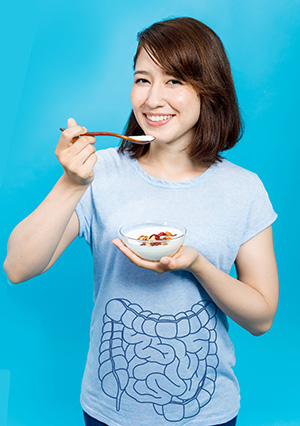 Over the last few years inflammation has become public enemy number one. And with good reason. It’s been linked with chronic diseases, autoimmune disorders, musculoskeletal pain and mental health issues. As more and more studies about gut health are published, it seems inflammation is the catalyst for many gut biome-related problems.

“We’ve known for a while that inflammation is a big problem,” says Bernard Kaminetsky, MD, medical director, MDVIP. “It’s why the MDVIP Wellness Program includes tests for inflammation.”

Inflammation has a purpose – it’s a natural part of the immune process. When you’re exposed to a toxin, prick your finger or catch a cold, your immune system activates, sending an army of white blood cells to fight off “foreign invaders” like bacteria and viruses.

It’s also beneficial for injuries such as a sprained ankle, tennis elbow or patellar tendonitis. After you’re injured, white blood cells flood the area to remove bacteria and dead cellular debris. You’ll probably notice the inflammation – it appears as redness and swelling in the area. This is acute inflammation; it’s short-term and part of the healing process.

But sometimes the immune system triggers an inflammatory response without a reason, raising your risk for developing chronic inflammation, which occurs on a much deeper, more internal level. And it doesn’t produce visible symptoms like acute inflammation does, leaving you unaware that there’s an underlying, potentially dangerous health issue brewing.

Between 70 and 80 percent of your immune system resides in your digestive tract. Small masses of lymphatic tissue in the small intestine, known as Peyer’s patches, protect the mucus membranes by releasing white blood cells and monitoring the bacterial population in the intestines, preventing an overgrowth harmful gut flora.

High numbers of toxic gut biomes may cause inflammation, compromise your immune system and lead to a variety of diseases.

“Gut microbiome research is still in the early stages. Although researchers don’t have all the pieces in place yet, it seems that controlling inflammation will eventually become a part of disease prevention and management,” Kaminetsky says.

For instance, a few years ago, researchers found that inflammation stimulates specific proteins that promote tumor progression, linking inflammation with certain types of cancer. And people with type 2 diabetes have higher levels of cytokines – inflammatory chemicals – than people without diabetes. Although researchers still have not pinpointed how inflammation causes cardiovascular disease, they recognize inflammation as a sign of it.

Although a lot more research is needed, a lack of gut biome diversity might be a tie to inflammation. Having less friendly bacteria available means less protection against disease-causing bacteria. Studies suggest that low gut flora diversity is a culprit in allergies, eczema and allergy-induced asthma. Other studies have found less microbiota diversity among heart failure, diabetes and obesity patients.

Even though gut health is still an unknown territory in many ways, there are steps you can take to create healthy biota:

Lastly, a probiotic supplement can help promote healthy gut biomes. Just make sure you talk to your MDVIP-affiliated doctor before taking a supplement or making any dietary changes. Looking for a primary care physician? Physicians in MDVIP-affiliated practices can customize a wellness plan for you. Find an MDVIP affiliate near you and begin your partnership in health »

Inflammation and Your Gut
Inflammation is linked with chronic diseases, autoimmune disorders, musculoskeletal pain and mental health issues — and it can start in your gut.

These Medications Affect Your Biome
Antibiotics are perhaps the most notorious medication for disrupting healthy gut bacteria, but they’re not the only ones that can cause havoc.

How Your Gut Biome Affects Weight
A growing body of evidence suggests there may be a connection between gut biomes and weight control.

Foods That Boost Your Biome
Before you turn to supplements or probiotic-fortified processed foods, consider adding these biome-boosting foods to your diet.