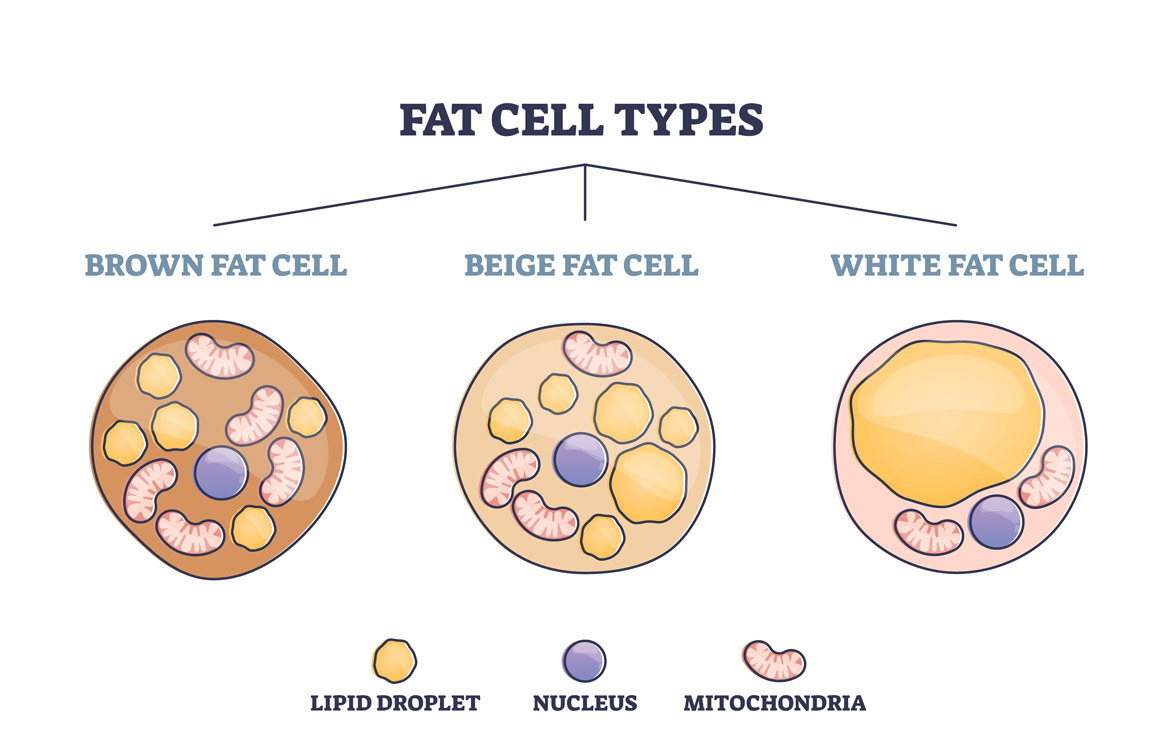 The fat around your waist, snuggled up to your organs and clinging to your thighs and backside isn’t just a nuisance. It’s actually a remarkable component of your body composition. Fat has many benefits, such as giving you energy, manages cholesterol and blood pressure, helps escort some vitamins to the places they need to go and protecting your vital organs.

But fat isn’t all one type or even one shade. Different types of body fat have different roles in your body – and they can cause different problems. Here’s what you need to know about fat.

Types of Body Fat By Color

Body fat is an umbrella term for different fat cells of different colors, ranging from white to brown. Each color has a function and a typical type of storage, i.e., essential, subcutaneous or visceral. Here’s a rundown of the different colors of fat cells.

This is the fat that jiggles on your legs as you walk or can be pinched around your waist. White fat cells vary in size and range in color from white to pale yellow. These cells generally settle on your face, abdominals, thighs and buttocks as subcutaneous or visceral fat. It’s a greasy fat, loosely held together by connective tissue and tends to hang off your body, which is why it’s considered unattractive. And while many people work hard to get rid it, it does have a purpose. White fat stores energy and produces adiponectin, a hormone that improves insulin sensitivity of the liver and muscles, lowering the risk for type 2 diabetes.

However, too much white fat slows the production of adiponectin, which can raise insulin levels and lead to obesity. It also can alter fat-releasing hormones and proteins causing an increase in blood pressure, inflammation levels and small cholesterol particles, while lowering good cholesterol. This is how white fat contributes to metabolic disorders such as heart disease, obesity, insulin resistance/type 2 diabetes, high blood pressure and an unhealthy cholesterol profile, particularly if the fat is stored around your torso.

Yellow fat is comprised of white fat cells. Unmetabolized yellow carotene from vegetables and grains often drifts over and settles into white fat cells, tinting them yellow. They have the same function as regular white cells.

You can’t see brown fat on your body. It’s much firmer than white/yellow fat and generally settles in essential areas such as between shoulder blades and around the supraclavicular area, kidneys, neck and spinal cord. Brown fat has several significant differences compared to white fat cells, such as having more mitochondria. These are the powerhouse structures in cells responsible for respiration and energy production. Mitochondria are rich in iron, giving these cells their brown color. Brown fat cells express high levels of UCP1 – a protein used by the mitochondria to burn calories and generate heat. Brown fat tissue also has more capillaries (as it consumes more oxygen) and unmyelinated nerves, which stimulate cells, preparing them for stress.

Brown fat activates during cold temperatures to burn energy (calories) to maintain your body temperature and keep you warm without shivering. The process is called thermogenesis, and it’s what keeps bears warm during the winter as they hibernate. However, brown fat also is linked with improving insulin sensitivity and blood sugar metabolism. Researchers believe that our bodies recruit and activate brown fat as we enter into pre-diabetes as a first line of defense, according to a study published in The Journal of Nuclear Medicine.

The National Institutes of Health (NIH) credits brown fat with lowering the risk for metabolic diseases (heart disease, high blood pressure, heart failure and type 2 diabetes). Researchers believe brown fat has a role in weight management. A recent study in mice found that exercise triggers brown fat to release a lipid, which surges into the bloodstream and raises metabolism, according to a study published in Cell Metabolism. And some researchers think there may be a link between activated brown fat and better bone health.

In simple terms, beige (also known as brite for brown in white) fat is brown fat mixed with white fat cells. Beige fat cells originate from white fat cells, but they’re usually stored subcutaneously in pea-sized deposits near the collarbone, along the spine. They undergo a browning process when exposed to low temperatures. They have similar characteristics of brown fat cells in that they can burn calories almost as effectively as brown fat. However, they work differently. Beige fat cells don’t express UCP1; they trigger it in response to irisin, a hormone that regulates fat tissue and blood sugar, helping prevent obesity and diabetes. Studies suggest resistance training helps raise irisin levels.

“Babies are born with a good amount of brown fat. It helps keep them warm, as they’re unable to shiver,” says Bernard Kaminetsky, MD, medical director, MDVIP. “However, as we age, it wanes, leaving just small patches around the shoulders, neck and spine. But there are some tactics you can take to activate brown and beige fat.”

How to Burn White Fat

Here are some common tips for burning white fat.

Here’s how to activate brown and beige (or brite) fat.

Regardless of its color, body fat is an important component of your body composition -- the percentage breakdown of the fat, muscle, bone and water in your body. You can track your body composition, which can give you a clearer picture of your overall health and risk for chronic diseases. That’s one of the reasons body composition is part of the MDVIP Wellness Program, so that your MDVIP-affiliated physician can help you manage body fat percentage and reduce dangerous white fat that tends to accumulate in the belly.

“Before you make any lifestyle change to improve the color ratio of your fat, talk to your primary care physician,” Kaminetsky said.

If you don’t have a primary care physician, consider partnering with an MDVIP-affiliated physician. They have time to really work with you and develop a wellness plan that can help you focus on weight management and body composition. Find a physician near you and begin your partnership in health »

Recent posts
What is Monkeypox?
How Much Should I Weigh?
Walking for Exercise Eases Knee Arthritis in People Over 50
Good News for Coffee Drinkers: Coffee is Linked to Lower Risk of Death
Poor Quality Diet Significantly Raises Risk for Type 2 Diabetes
categories
Primary Care
Obesity
FIND A DOCTOR NEAR YOU
Physician Locator