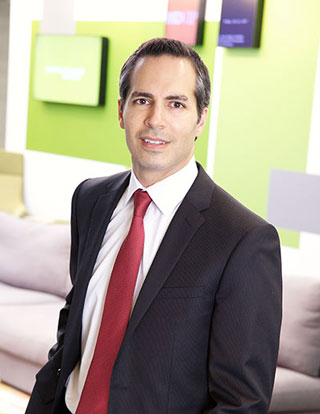 Matt was hired by MDVIP’s founding physicians in 2005 to oversee all aspects of the company’s finances. Today, as President and CFO, he is responsible for leading the execution of the organization’s strategic plan to achieve goals that support both MDVIP affiliated physicians and patients nationally, as well as leading the financial stewardship of MDVIP.

“Just as doctors have a responsibility to do no harm to patients, we carry that through with a conservative approach that enables physicians to have the freedom to practice in a deeper relationship with their patients."

Why I value my MDVIP doctor:
"Caren recognizes I spend a lot of time traveling around the country talking with our affiliated physicians about what we can do better, and thus sitting sedentary on flights, in taxis, enduring airport delays and eating on the go. She has helped me make exercise a daily component of my life, doing strength training and cardio frequently through the week — and maintaining discipline even when I’m traveling like a mad person."

"This supports and enhances a physician’s professional, personal and financial freedom—instead of being reliant in the traditional primary care practice model, which is based on transactional and episodic events.”

Prior to MDVIP, Matt held several senior financial management positions in the biotechnology, software and high-tech hardware fields with start-up growth companies backed by various venture capital funds. His previous roles include Director of Finance at biotech company U.S. Genomics as well as six years at one of the big Four public accounting firms KPMG, as an Audit Manager.