Before I begin to explain antibody testing, I have a few disclosures:

There is a palpable sense of urgency to develop and implement antibody testing for SARS-CoV2. Demand for testing in my practice is high despite the fact that I’ve educated my patients about the limitations of such testing. It is important to balance the urgency for antibody testing with the accuracy and limitations of such testing. At this point, I think it is premature to order antibody tests for anything other than epidemiologic surveillance and curiosity.

The FDA through EUA (emergency use authorization) has allowed companies to begin selling products immediately, and as one developer stated, “send us your data and if we don’t like it, you’ll have to take your product back.” The process that normally vets and governs new tests is simply overwhelmed by the immunoassay traffic. An FDA employee was quoted as saying “half of all of the tests out there are junk.”

Developing an antibody test is much harder than PCR. Once you have a viral sequence, you can perform PCR immediately. Antibody testing however requires an understanding of the proteins forming the viral coat and specifically those to which the immune system directs a response. Antibodies are split into neutralizing and non-neutralizing. Neutralizing antibodies are to the spike protein, specifically the RBD (receptor binding domain). These are the antibodies that will create “protection.” Non-neutralizing antibodies are those that are made against other structural components of the viral coat (nucleocapsid is one) and do not provide neutralizing ability. Apparently, it is much more challenging to develop an IgM assay compared to IgG and IgA.

Most of the antibody tests are either ELISA or lateral flow assays. ELISA is typically performed using whole blood and exposes known antigen on a plate (spike protein or nucleocapsid protein) to patient serum. Antibodies from the serum of a sick or recovered patient will bind, and following a wash with a second set of antibodies against the protein antibody complex that produces a detectable color response, it results. Lateral flow assays use finger stick blood typically to detect IgM or IgG to the virus. A third test called a surrogate viral neutralization test (sVNT) may be the most accurate but requires a certain type of lab and might be more of a challenge to scale though preliminary data suggests close to 100 percent sensitivity and specificity.

Below is a chart briefly describing each of these methods. 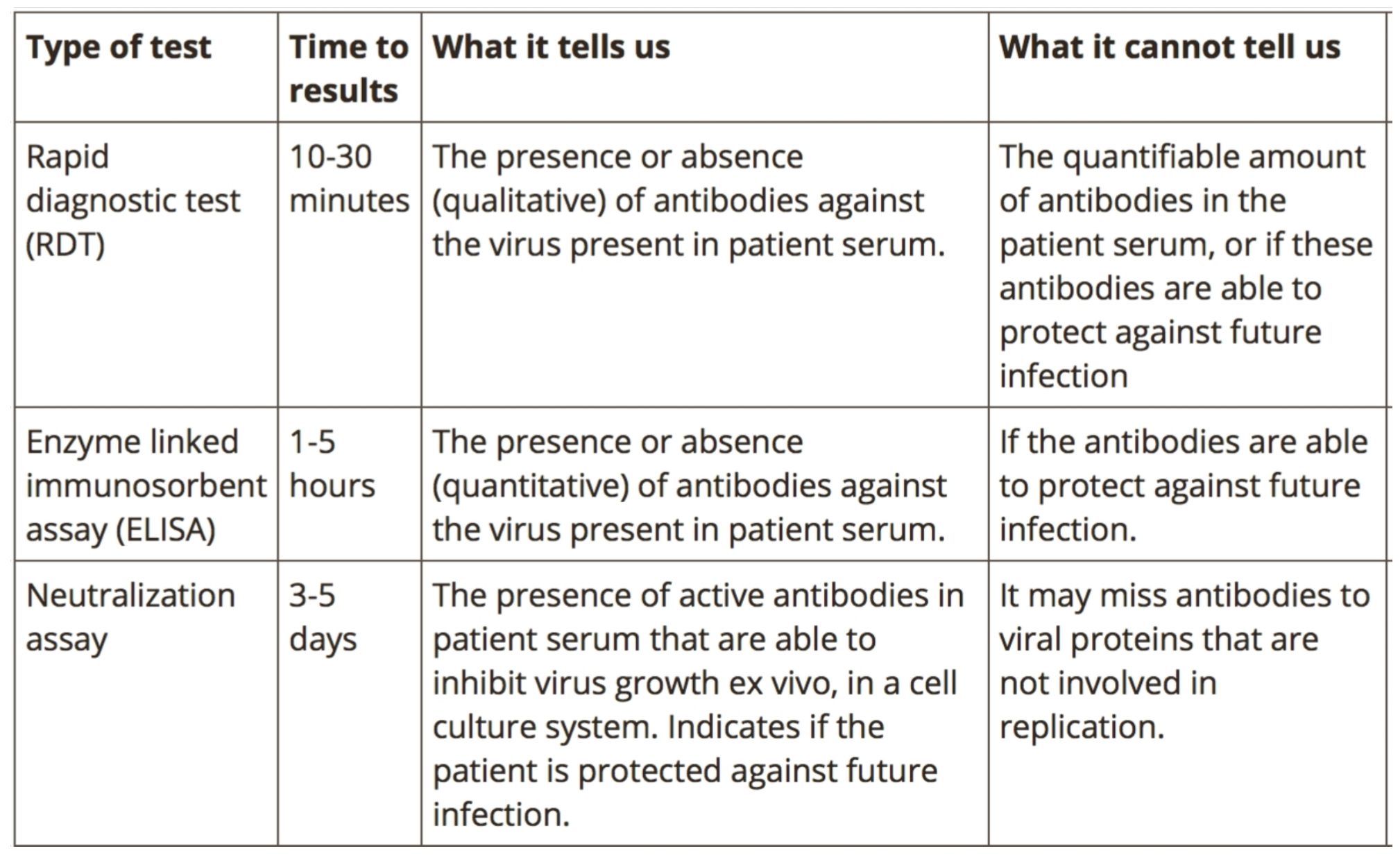 Antibody testing will be useful to:

There are four structural proteins to the SARS-CoV2 virus, but the main immunogens are the spike and the nucleocapsid proteins.

The limitations of antibody testing currently:

Remember that over 90 percent of patients will be seropositive by day 14 and by day 8, antibody testing surpasses nucleic acid amplification in sensitivity. The combination of tests is optimal of course.

Here is the IgG curve for SARS: 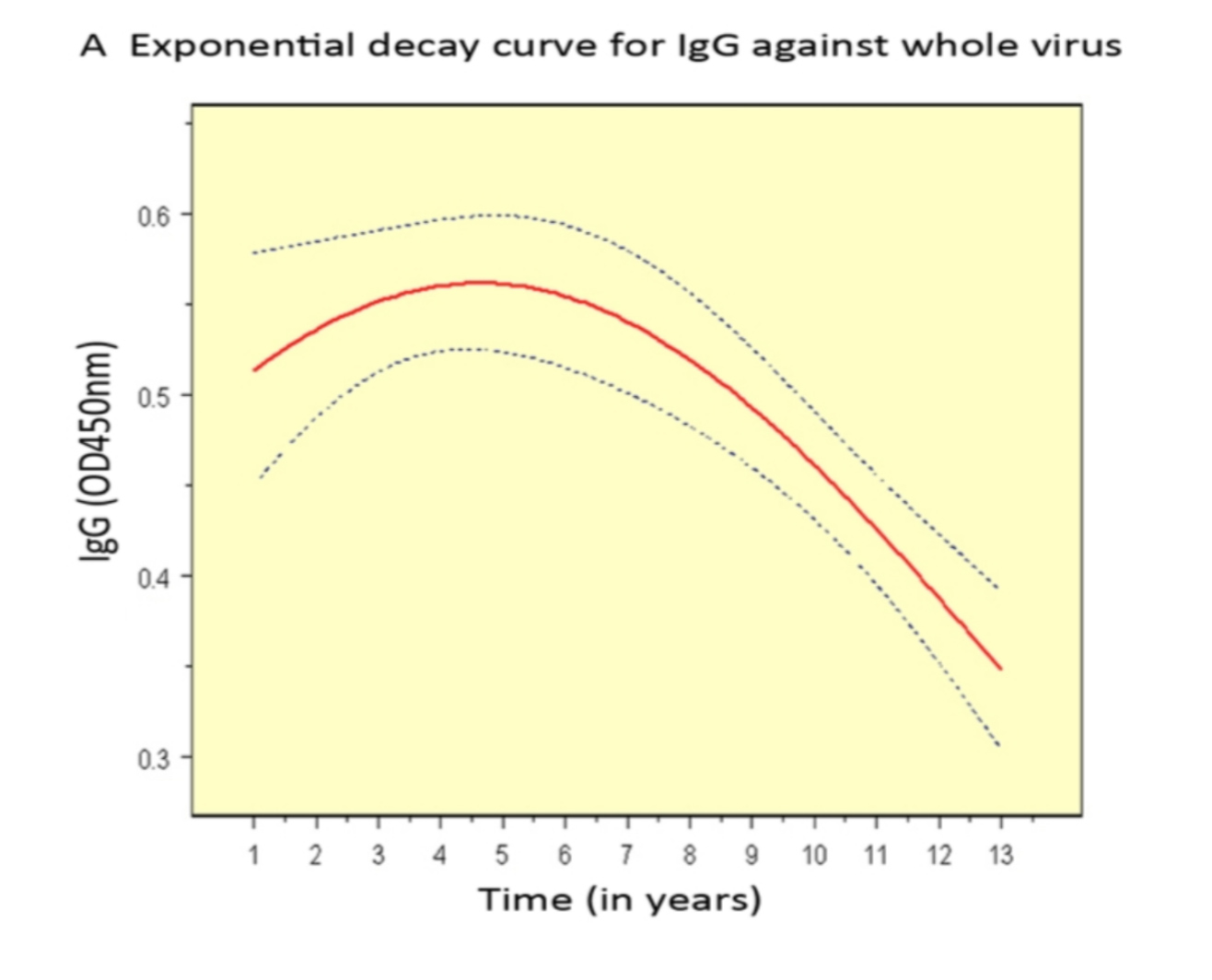 And here is the initial curve for SARS-CoV2 showing on the right a drop in IgG after only a few months: 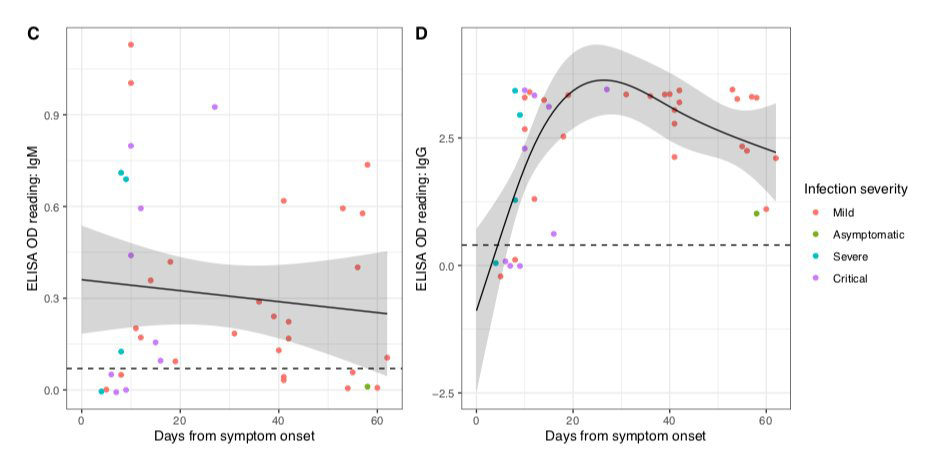 MDVIP has been in discussions with Quest and we’ll be hearing from Dr. Rick Pesano, MD, next week who has spent his career as an infectious disease physician with an expertise in test development. Quest is using both the Euroimmun (developed in Germany) which is directed against the spike antigen (neutralizing antibody) and the Abbot assay that is directed against the nucleocapsid antigen (a non-neutralizing antibody).

The RBD (receptor binding domain) of the spike protein accounts for 33 percent of the
Spike protein (S1 subunit) and there is a test developed by Wantai (Wantai Total Ab Elisa) which appears to demonstrate 100 percent specificity for the RBD of SARS-CoV2, though to my knowledge is not available in the U.S. It also demonstrates superior sensitivity compared to Euroimmun.

Quest will be offering IgG along with IgM and IgA. The IgA is offered by a few companies and provides another layer of specificity. The Euroimmun IgG is 96 percent specific with IgA in a similar range and sensitivity to IgA at 90 percent but lower for IgG.

At this point, I think it is premature to order antibody tests for anything other than epidemiologic surveillance and curiosity. I’m certain that with more time, we’ll develop a deeper understanding of how the immune response to the virus behaves and we’ll use this information to craft a plan at the individual level that helps with decisions about returning to life as we knew it. 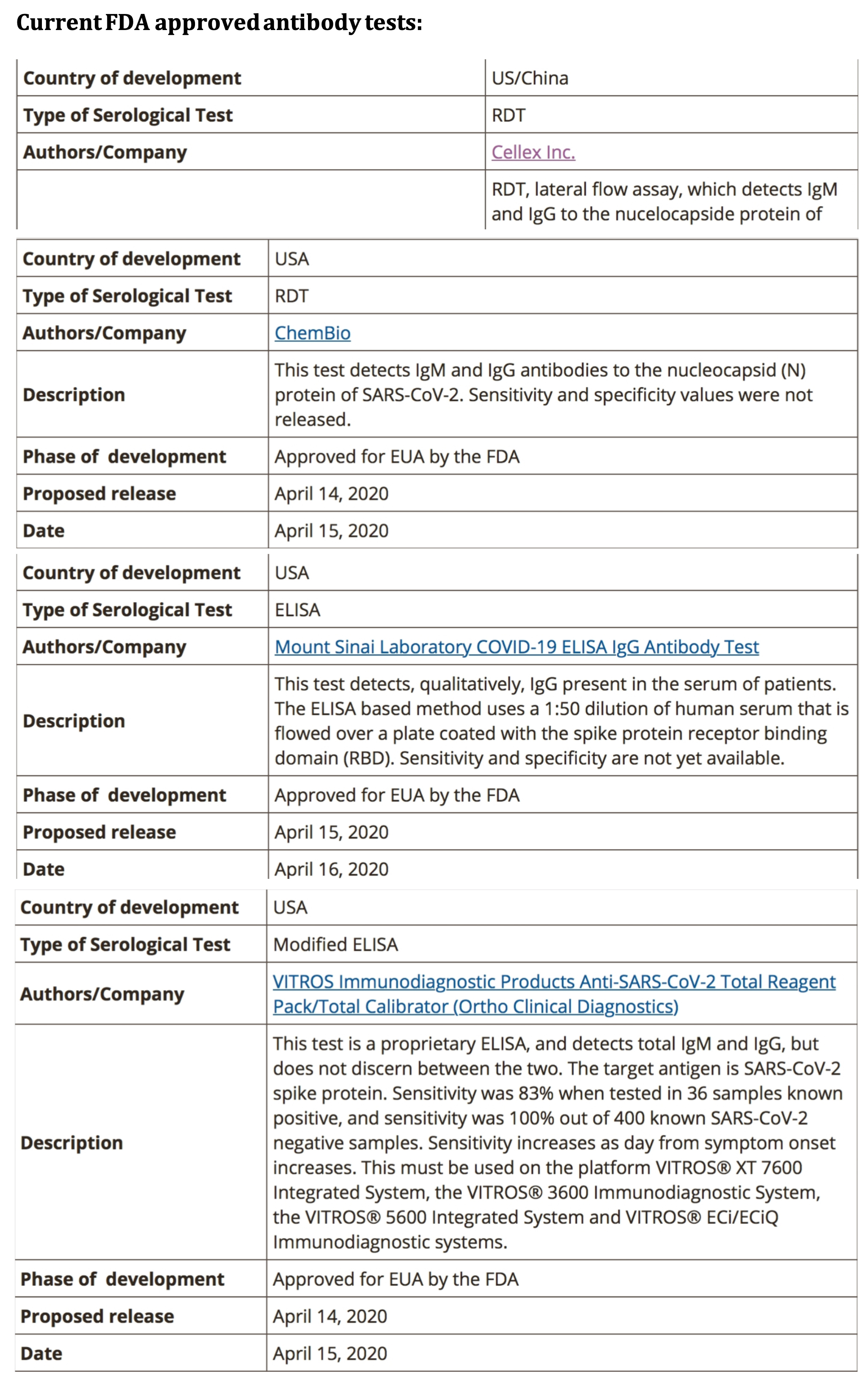 This blog reflects the medical opinion of Dr. Lou Malinow, an MDVIP-affiliated internist, board-certified hypertension specialist and Diplomate of the American Board of Lipidology, and not necessarily the opinion of all physicians in the MDVIP national network.

View All Posts By Louis B Malinow, MD
Top