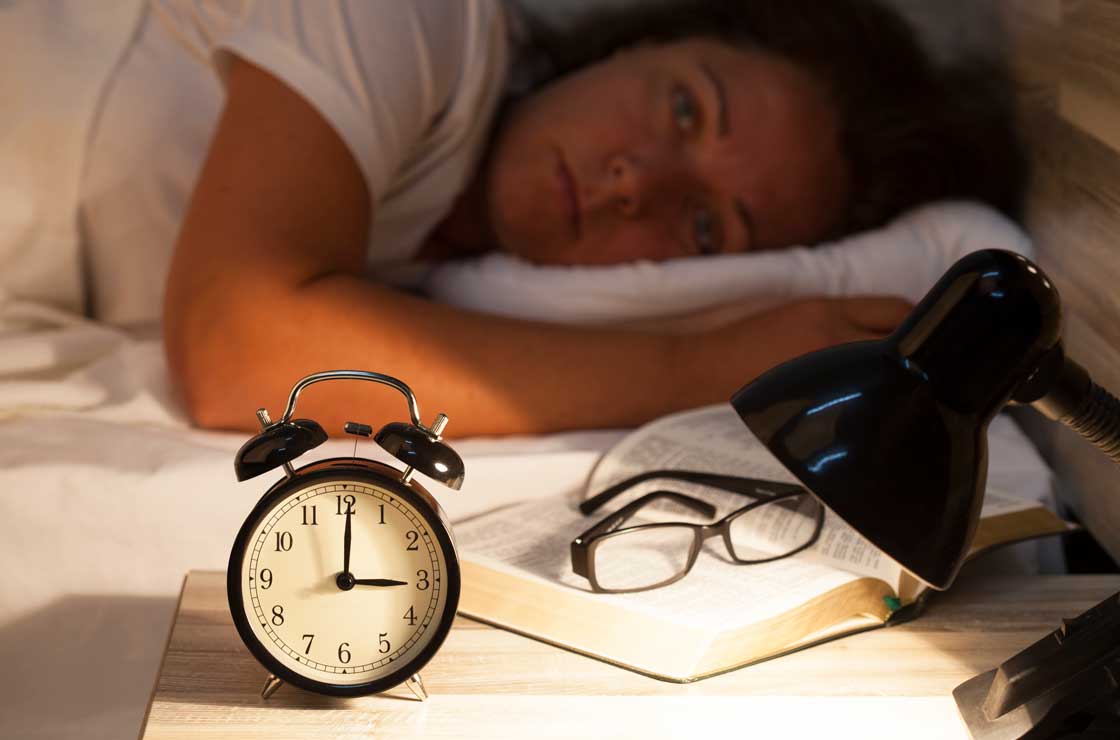 During sleep we (1) are completely vulnerable to predators; (2) cannot hunt for food; (3) cannot hunt for a mate or reproduce; and (4) cannot care for or protect our young.  For evolution to not have eliminated sleep on this basis means that it must be incredibly important.

Sleep may relate to risk of Alzheimer’s disease.

Ronald Reagan and Margaret Thatcher were both very vocal about how little sleep they needed to function.  They both died from very severe dementia.

In 2012, the glymphatic system of the brain was discovered.  When we sleep, the glial cells shrink in half and make room for a CSF flush out of the metabolic debris that accumulated during wakefulness.

In studies, if animals or humans get less than seven hours of sleep, there is a very quick increase in the amount of B amyloid in the brain, the protein associated with Alzheimer’s disease (which is a complicated and multifactorial issue). In humans, if REM sleep is excised (this can be done by playing tones while people are asleep that keeps them out of REM without waking them) and yet they still get a full eight hours of sleep, the glymphatic system is disrupted and there is an immediate increase in circulating tau protein (the other protein linked to Alzheimer’s).

During non-REM sleep, there are stages 1 and 2 (light sleep) and stages 3 and 4 (deep, restorative sleep).

We cycle through the non-REM and REM stages every 90 minutes throughout the night, though the amount of deep sleep tends to be disproportionately larger in the early part of the night while REM sleep occupies a larger percentage of the sleep cycle later in the night.

After 20 minutes of sleep, we typically enter stage 3 and 4 (deep sleep).  Throughout the night, we progress from stage 1 to 2 to 3 to 4 to REM and back up the ladder.  From 9 pm to 3 am, we are getting primarily non-REM, and from 3 am to 9 am, we are getting primarily REM.  If you’re early to bed and early to rise, you may be shortchanging REM sleep, while the opposite holds true for those late to bed and late to rise.

Light sleep (we get a disproportionate amount of stage 2 in the last two hours of the night) prepares the brain to receive new learning the next day.  In other words, light sleep “squeezes out the sponge” and gets it ready to absorb more.

Deep sleep (stages 3 and 4) essentially hits the “save” button on new memories from the previous day.

REM sleep seems not only to collate memories in the brain (to put them in the right file for access), but also seems to have a tremendous role in our emotional state.  It appears to recalibrate emotional networks in the brain like the amygdala and prefrontal cortex.  Lack of REM is the strongest correlate with teenage suicide and poor mental health in adults.  This is likely one of the reasons a bad night’s sleep produces bad moods, especially in younger patients.  Look at what happens when a 4-year-old misses a nap!

Matthew Walker in his book Why We Sleep calls sleep “emotional first aid.”

Only mammals and birds have REM sleep.  All other animals have strictly non-REM.  Depriving animals of REM sleep kills them faster than depriving them of non-REM.  REM sleep affects the cortex (our superpower).

Today, we are sleeping less than at any time in human history. The average person sleeps about 6.5 hours per night, while in 1942 the average person slept 7.9 hours per night. Lack of sleep should not be glorified if you have a job that involves any aspect of human safety (one of my local surgeons works 19 hours a day and reminds me proudly every time I see him).  Undoubtedly, this chronic societal lack of sleep is contributing to ill health.  “Messing” with what Mother Nature decided was best after millions of years of evolution is probably not a good idea.

Getting less than five hours of sleep per night increased coronary calcium by 2 to 3-fold.  This is thought to be related to activation of the sympathetic nervous system and overactivation of cortisol. Deep sleep is also the best natural antihypertensive as it quiets the sympathetic nervous system.  Insulin levels and glucose tend to be higher with less sleep, which impacts cardiac risk. Remember that high sugar causes microvascular disease, but high insulin is the cause of macrovascular disease. If you have higher cortisol (which is CATabolic to muscle and Anabolic to fat) and high insulin (which is ANAbolic to both fat and muscle), you have more fat forming and you tend to lose muscle. Not a great phenotype. Testosterone (CATabolic to fat and ANAbolic to muscle, which is the best of both worlds) tends to drop dramatically in those not sleeping enough.

Of interest, human beings are the only living creatures that purposefully deprive themselves of sleep.

Sleep “debt” accumulates during the week but cannot be paid off on the weekend.  Many folks sleep deprive themselves during the week and then binge sleep on the weekend.  This “sleep bulimia” doesn’t repay the debt lost.  Sleep deficiency never existed during history, so evolution hasn’t yet built in a mechanism of correcting the debt that builds.

There is a significant link between sleep and cancer.  The causal evidence is strong enough for the WHO to label nightshift work a potential carcinogen.

Natural killer cells identify and destroy cancer.  One night of deficient sleep dropped natural killer cell activity 70 percent.  Given the fact that all of us develop cancer cells on a daily basis and our immune system hunts them down, we should all be doing our best not to negotiate less sleep for ourselves.  One of the hypotheses for the increase in cancer with age is that our sleep quality declines with age.  Because sleep is one of the most powerful regulators of the immune system, we also see more infections in the sleepless (and this likely accounts for all the chronic illness we see in college kids).

An interesting study in two groups of mice with cancer:  one group slept normally while the other group had sleep restricted.  The group with restricted sleep had 200 percent more tumor growth and had more metastases than the well-slept group.

From an article written by Matthew Walker for The Lancet:

During the day, adenosine builds up, which is the “sleepiness” chemical.  Adenosine exerts more and more sleep “pressure” as the day progresses.  If you sleep during the day, you discharge some of that and lose sleep pressure at night.  Caffeine blocks adenosine, which is how it increases alertness.  Sleep clears away 16 hours worth of adenosine.

The theory of insomnia is that it is a problem with cortisol. Cortisol in sleep-onset insomniacs does drop appropriately in the evening but then ramps back up right before bed. In sleep-maintenance insomniacs who wake in the middle of the night, it’s because there is an early and inappropriately timed spike in cortisol in the middle of the night that produces alertness.

Sleeping pills do not produce naturalistic sleep. They are a “chemical baseball bat” to the cortex, which produces unconsciousness but not normal quality sleep. For instance (I don’t remember who I’m stealing this from), if you saw a person lying in the road, you wouldn’t say, “Oh, he must be taking a nap.” You would say, “Oh, he’s unconscious. I wonder what happened.” Ambien and Lunesta and the other sedative hypnotics produce very unnatural sleep, and epidemiologic studies do show a higher rate of death and cancer with these agents.  Getting back to what lack of sleep does to the immune system and to natural killer cell activity and cardiac risk, it is not surprising to think that if a chemical is causing someone to remain in a state that seems like sleep, but isn’t sleep with appropriate stages, then this person may not be getting the types of sleep he/she needs with respective healing properties.  In an animal study, Ambien given to animals worsened brain plasticity (terminology used to describe rewiring that occurs after something new is learned) by 50 percent, even when the animals slept longer as compared to a normal night’s sleep. Chronic alcohol use at night and chronic THC use impair REM sleep and probably increase long-term disease risk as a result. CBD seems to be a better choice, at least at the time of this article, as it preserves normal sleep architecture.

Just a few nights of inadequate sleep substantially worsen insulin resistance.  The mechanism is thought to be related to insulin losing the ability to phosphorylate Akt, which is required to move the glut4 receptor to the cell surface.  Much more insulin is required to make this happen, and the hyperinsulinemia that results (and in part may relate to the cortisol axis) drives the macrovascular risk.

Another study comparing six hours of sleep for one week to eight hours of sleep nightly showed that 711 genes (three percent of the entire genome) were impacted.  Half were downregulated and half were upregulated.  Those that were downregulated related to the immune system, while those that are upregulated related to cancer risk primarily.  This indicates that sleep negatively impacts the genome by epigenetically modifying it.

Those patients sleeping less than six hours per night for a week have downregulated leptin (the “I’m full” signal) and upregulated ghrelin, which is the hunger hormone. Typically, lack of sleep leads to not only more food intake, but also to poorer food choices.

In the employment environment, data has shown that those who slept six hours or less per night tended to challenge themselves less on the job, let other team members do most of the work, select less thought-provoking problems, and were less ethical. Bosses who were under-slept also were less inspiring and charismatic.

Last fact: Those who comply with CPAP in the face of sleep apnea complicated by low oxygen held off dementia for an additional 10 years!  How’s that for a convincing argument for your patients to use CPAP?

Sources:
Matthew Walker’s book Why We Sleep was incredibly informative, as are his podcasts and Ted Talk.