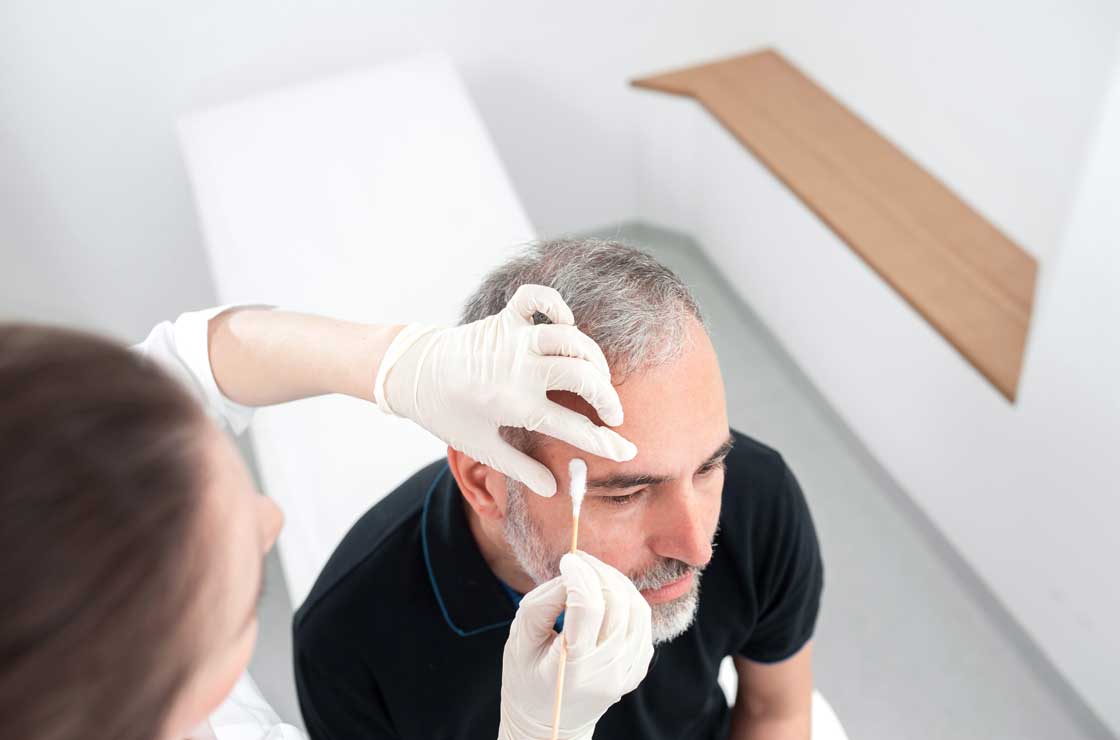 Skin cancer is the most common form of cancer in the U.S. Each year more than 5.4 million cases of nonmelanoma skin cancer are treated in more than 3.3 million people, according to the Skin Cancer Foundation. Close to 100,000 cases of melanoma — the most dangerous form — will be diagnosed in 2019.

Biopsies are generally used to detect skin cancer. They’re fairly accurate but can cause some discomfort and scarring. The worst part: It can take several days to a week and a half to get results. But good news is on the horizon. Researchers from Rutgers University and University of British Columbia are working on alternatives to biopsies that don’t involve pain or scarring and produce results immediately.

Most skin cancers, when detected early, are easiest to treat. But that’s the problem -- many people don’t know how to recognize a suspicious spot on their skin.

“I’ve had patients schedule an appointment with me for their annual exam or to treat a cold, and then they’re shocked when the blemish they’ve had for a few weeks or a small ‘freckle’ that just appeared on their nose turns out to be skin cancer,” says Bernard Kaminetsky, MD, medical director, MDVIP.

Every month you should scan your body from head to toe and let your doctor know if you notice:

There are eight different types of nonmelanoma cancers, the most well-known being basal cell and squamous cell cancers. These types of cancers take on many different appearances, so it’s important to let you doctor know if you notice any skin changes. Don’t worry if they seem innocuous – let you doctor determine if the skin changes are significant.

Melanomas are sometimes easier to recognize. Many of them follow the ABCDE rule, so let your doctor know if a mole, spot or birthmark has:

How is Skin Cancer Diagnosed?

If your doctor agrees the spot looks suspicious, one of the following types of biopsies may be ordered (usually performed by a dermatologist):

A local anesthetic is usually given before the biopsy. After the biopsy is conducted, samples are sent to a lab, where it’s examined by a pathologist and often a dermatologist.

“Many patients aren’t thrilled about having a biopsy. They’re painful and often cause scarring,” says Kaminetsky. “That’s why it’s exciting to see that new technology will be available in the near future.”

Rutgers University researchers developed a virtual biopsy that uses vibrational optical coherence tomography (VOCT) that pulses infrared light and soundwaves against the skin to create a 3-D map of the skin lesion,  measures the density and stiffness of the tissue (cancer cells are stiffer than healthy cells) and measures the skin’s vibrations to determine if the lesion is malignant. The procedure takes about 15 minutes, is painless and doesn’t leave a scar. The device was tested on eight volunteers over a six-month period. Researchers are waiting FDA approval and acknowledge more research is needed to fully understand the device’s capabilities.

And a University of British Columbia researcher developed a compact laser probe that will probably be used as a preliminary or additional screening device. It uses light waves to detect cancer cells, which are denser, larger and irregularly shaped. They also respond differently to light waves, forming very distinct patterns as light beams pass through them. Results are reported through numerical values, like a thermometer. The device was created using inexpensive materials, enabling it to be easily integrated into the healthcare system.

With skin cancer, a pound of prevention is worth an ounce of cure. Protect your skin by skipping tanning salons and UV tanning beds. Avoid sun exposure between 10 a.m. and 4 p.m. Wear a broad-spectrum sunscreen with an SPF of 15 or higher, as well as sun-protective clothing, hat and sunglasses when outdoors. And most importantly, tell your doctor about any changes on your skin.

If you don’t have a primary care physician, consider partnering with an MDVIP-affiliated physician. MDVIP doctors have the time to work with you to help you prevent and detect skin cancer. Find a physician near you and begin your partnership in health »