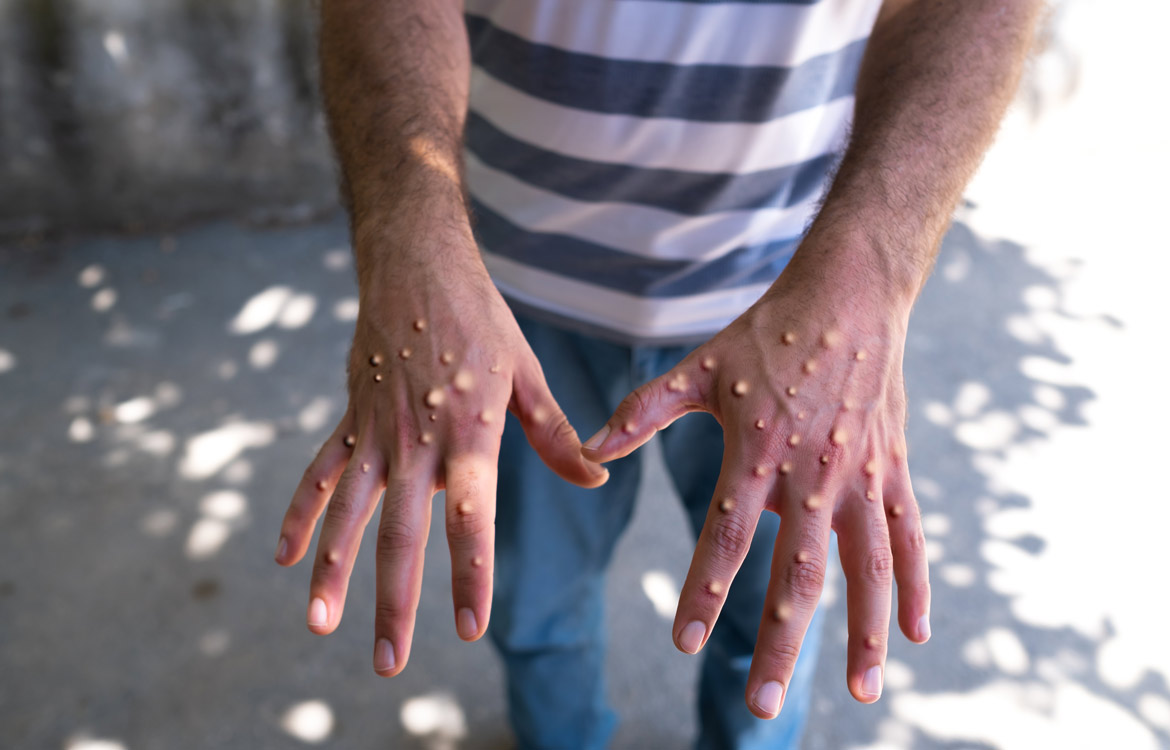 Monkeypox has gotten a lot of media attention lately. But what is it and how is it transmitted?

Danish researchers first identified the monkeypox virus in 1958 in monkeys imported from Singapore. It wasn’t until 1970 that the first human case was diagnosed in the Democratic Republic of Congo, one of the 10 countries in western and central Africa where the virus became endemic.

The U.S. had its first outbreak in 2003, likely caused by prairie dogs brought over from Ghana. It affected about 70 people before getting under control. But in May 2022, a handful of countries including the U.S. began experiencing outbreaks. As of late July, about 3,600 Americans in 46 states, Washington, DC and Puerto Rico were diagnosed with monkeypox -- about 20 percent of worldwide cases. In response, the U.S. government, along with some states and cities have declared states of public health emergency. Should you be concerned? Here’s what you need to know.

Monkeypox is a rare disease caused by the monkeypox virus of the Orthopox genus and Poxviridae family of viruses. It causes lesions, skin nodules or a rash. Other pox viruses include:

(But not chickenpox. The varicella-zoster virus -- which causes chickenpox -- is part of the herpesvirus family of viruses.)

The Poxviridae family has subgroups of viruses, one of them being variola. Both monkeypox and the eradicated smallpox are part of this subgroup. This is why they have similar symptoms and are often compared to each other. But smallpox was a very dangerous virus, killing on average 3 of every 10 people who contracted it. Monkeypox, however, is milder and rarely fatal.

How is Monkeypox Transmitted?

You can catch monkeypox through close, prolonged personal contact such as face-to-face conversations, hugging and kissing. You can also spread the virus through contact with bodily fluids, respiratory secretions and surfaces touched/used by an infected person.

However, public health officials are learning towards intimate contact as the primary mode of transmission in this outbreak. Epidemiological statistics show that 99 percent of cases involve men having sex with men. In fact, the World Health Organization (WHO) has advised gay and bisexual men to limit their number of their partners to reduce the spread of monkeypox.

A person with monkeypox is contagious from the moment their symptoms begin until the rash has fully healed, and a new layer of skin has formed. This is generally between two and four weeks.

What Happens if You Become Infected?

Monkeypox has an incubation period that ranges from 5 to 21 days, although most cases fall between 6 and 13 days. This means if you catch the virus, it could take up to a few weeks for symptoms to appear.

The WHO divides the infection into two phases – invasion and skin eruption. The invasion phase lasts up to five days and can cause:

As you move into the skin eruption phase, you’ll develop a rash of pustules on your hands, feet, eyes, mouth, face and genitals that are:

What are some possible complications?

Most people recover from monkeypox without too many issues. Your age, personal health history and extent of viral exposure can trigger a complication such as a secondary infection, pneumonia, sepsis, encephalitis and/or cornea infection, which can lead to vision loss. If you contract monkeypox and have a chronic health condition or a compromised immune system, work closely with your doctor.

How can I prevent contracting it?

To limit your exposure to monkeypox, practice the following:

The monkeypox and smallpox viruses are so similar that the antibodies you acquire after getting the smallpox vaccine provide protection against both smallpox and monkeypox.

However, smallpox vaccination programs were shut down after it was eradicated in 1980. At this point, only people working in research laboratories or in certain military positions can be vaccinated against smallpox. This leaves most people born after 1980, particularly children, with a higher risk of contracting monkeypox and developing serious complications.

There are two vaccines, JYNNEOS and ACAM2000, available for monkeypox. The Centers for Disease Control and Prevention has more information here on monkeypox vaccines.

How is monkeypox treated?

Most monkeypox cases don’t need treatment. The virus simply runs its course. However, severe cases can be treated with tecovirimat or TPOXX. This antiviral medication fights smallpox and monkeypox by inhibiting the orthopoxvirus VP37 envelope wrapping protein and is effective against smallpox, cowpox and monkeypox. Complications such as pneumonia or sepsis are usually treated with a standard protocol of care.

Does monkeypox has any similarities or ties to COVID-19?

No. COVID-19 and its variants are diseases caused by the SARS-CoV2 virus, part of the SARS family of viruses. COVID-19 and early variants such as Delta caused severe disease, life-threatening complications, hospitalizations and death in many people.

Monkeypox does not spread as easily as COVID-19. Very few hospitalizations and deaths have been linked to it.

Do public health experts foresee a shutdown to control monkeypox?

No. As of now and for the foreseeable future, there is little threat of monkeypox becoming a global pandemic.

If you have concerns about monkeypox, talk to your doctor. If you don’t have a primary care physician, consider partnering with an MDVIP-affiliated physician? Physicians in MDVIP-affiliated practices can customize a wellness plan. Find an MDVIP affiliate near you and begin your partnership in health »