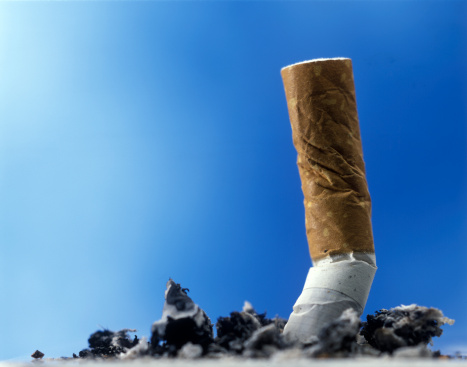 You're probably aware of the dangers associated with smoking and second-hand smoke. But so-called third-hand smoke, the chemical residue left behind on surfaces and clothing after smoking tobacco products, may also be a health risk--particularly to children--according to a study published in Tobacco Control.

Nicotine and other chemicals in tobacco products can react with common indoor pollutants to produce a toxic combination of substances that linger in the air and accumulate on surfaces.

You may not be familiar with third-hand smoke but researchers began treating it as a hazard about ten years ago. And although cancer-causing particles clinging to your clothes, hair and furniture seem obviously harmful, aside from a few studies, the effects of third-hand smoke lacked significant scientific evidence.

But in a pilot study, researchers from Cincinnati Children’s Hospital Medical Center and San Diego State University examined 25 children who were taken to an emergency room for breathing problems associated with second-hand smoke. They found on average three times more nicotine on the children’s hands than non-smoking adults who lived with smokers and cotinine—a tobacco exposure biomarker--in the saliva of 96 percent of the children. Researchers speculate the high levels of nicotine on children’s hands are the result of them touching more surfaces than adults.

In addition to nicotine, there about 250 other toxins in third-hand smoke. A study published in Nature linked early exposure to third-hand smoke to a smaller body size and impaired immune system development in mice. And it seems to be the leading cause of sudden death syndrome (SIDS) in rats, according to another study reported in Scientific American. Lastly, third-hand may cause up to 60 percent of smoke’s damage to a non-smoker and may decrease a person’s lifespan by a year, reports Science News for Students.

But unlike second-hand smoke, third-hand smoke can’t be cleaned or cleared away. This means that if you’re a smoker, the best way to protect you and your loved ones, especially your grandchildren, is to create smoke-free environment. Here’s what you need to know.