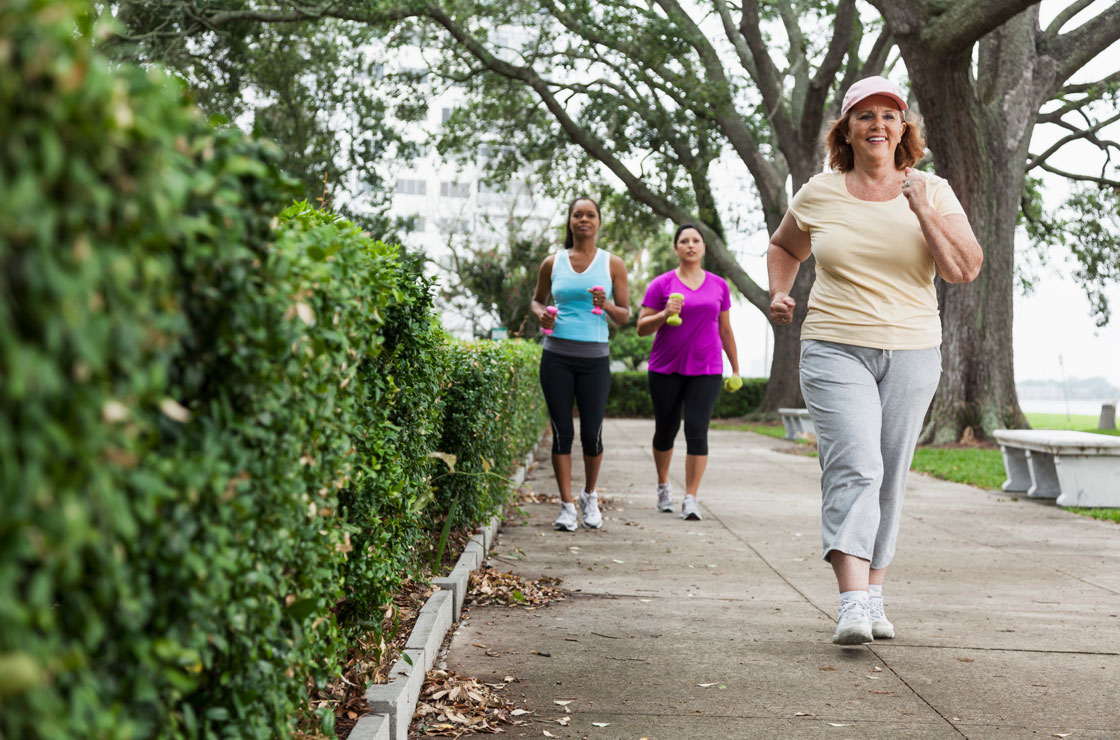 Heart failure affects 6.2 million Americans. And the number of deaths continue rising. In 2018, heart failure was mentioned on close to 400,000 death certificates. But there’s some good news: For women, walking may be a key to preventing it. Walking for at least 40 minutes several times per week at an average pace can lower the risk of heart failure by 25 percent among older women, according to a study presented at the American College of Cardiology’s 67th Annual Scientific Sessions.

What is Heart Failure?

Heart failure is a condition in which the heart has either become so weak or stiff that it’s not able to pump blood effectively. There are two basic types: systolic and diastolic.

Systolic heart failure occurs when the heart muscle has weakened so much that it’s unable to contract with enough force to deliver an adequate amount of oxygenated blood throughout the body. Diastolic heart failure is when the heart muscle has stiffened so much that the left ventricle is unable to fully relax between beats, preventing it from filling completely, which causes the blood pressure in the lungs to rise and fluid to accumulate in the lungs, abdomen and legs.

Your risk for heart failure also increases with age. Women between 74 and 85 years old are three times as likely to have heart failure than women between 65 and 74, according to the American College of Cardiology.

Although women account for 3.6 million cases of heart failure – more than 50 percent of all cases -- advances in heart failure treatment and prevention predominantly apply to men and haven’t been sufficiently studied in women, according to Cleveland Clinic.

“This study is very important because it provides some direction for women at risk for heart failure,” says Bernard Kaminetsky, MD, medical director, MDVIP. “And walking is one of the most sensible, low-cost, convenient activities available.”

Researchers surveyed healthy women ages 50 to 79 involved in the Women’s Health Initiative to collect data on their physical activity levels and if they walked, the frequency, duration and speed of their sessions. More than 89,0000 women were walkers and followed for 10 years to track health outcomes such as heart failure.

Over the course of the study, researchers identified 1,156 women who had developed heart failure. After analyzing the data, a correlation was found between more walking and a lower the chance of developing heart failure.

“There are some limitations to this study. Correlations show relationships, but don’t prove a cause and effect. And survey research is based on study participants reporting their behaviors, which might not always be accurate,” says Kaminetsky. “However, the gist of the findings is in line with other studies that suggest walking strengthens your heart and helps prevent heart failure.”

How Walking Strengthens Your Heart

When you walk, you're working muscles, like your legs, need more blood. It’s the heart’s job to pump more blood and send it to these muscles. This demand on the heart causes it to temporarily increase your heart rate and blood pressure, ultimately strengthening it. Over time, the heart will become stronger and more efficient, pumping out more blood with each heartbeat, without having to increase the heart rate as high.

“Walking is an effective cardiovascular activity for people of different health and fitness backgrounds. It’s preferred by many people as they age because it’s easy on your joints. Many people like to make walking a social activity, inviting friends or neighbors to walk with them,” Kaminetsky says.

If you’re interested in starting or revamping your walking program, work with your MDVIP-affiliated physician. In addition to guidance on walking for heart health, they can also provide you with post-walking stretches from Perfect Fit, a digital library of more than 1,000 exercises and workouts. Looking for a primary care physician? Physicians in MDVIP-affiliated practices can customize a wellness plan for you. Find an MDVIP affiliate near you and begin your partnership in health »