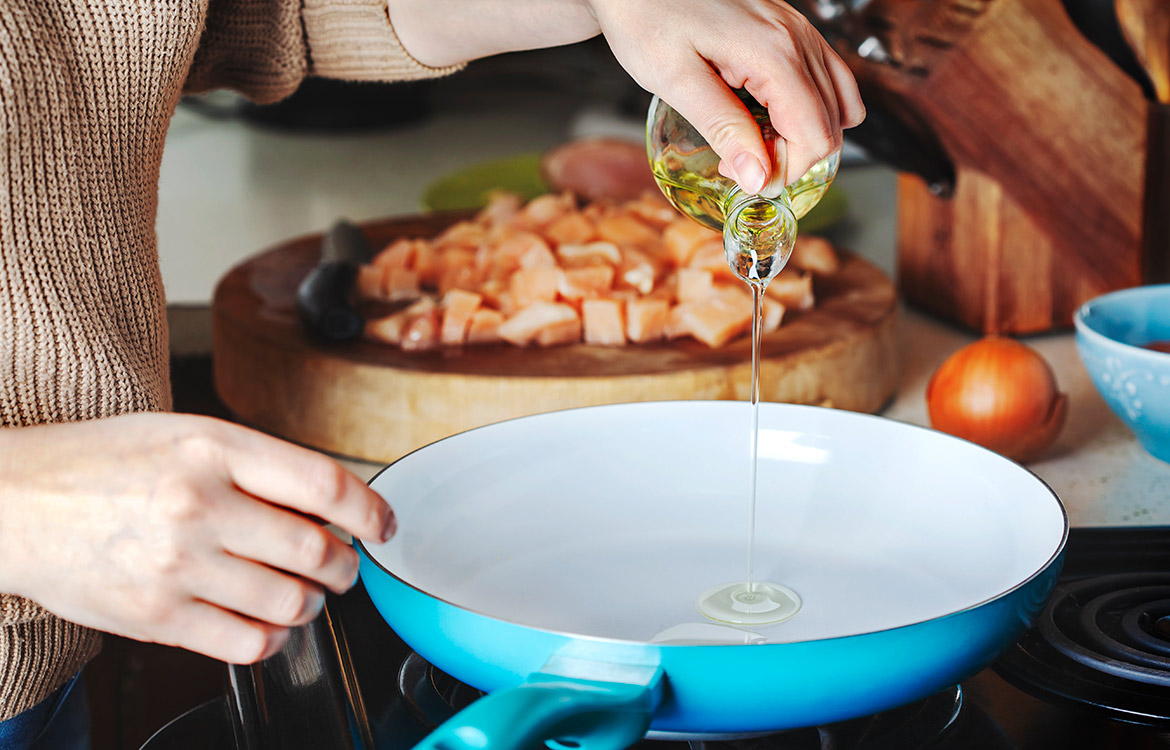 The topic is surprisingly polarizing among nutritionists, foodies and many health advocates. Are cooking oils made from seeds like canola or soy healthy and safe?

The oils, which have been a staple of western diets for more than 100 years (oil made from soybeans goes back thousands of years in Eastern diets), seem innocuous enough. We use them in baking and frying, and food manufactures use them in everything from mayonnaise to cookies. They have soared in popularity at the expense of butter and lard, once the main source of cooking fats in American diets.

They are often seen as heart-healthy – at least more heart healthy than the fats they replaced. And they are cheap compared to other alternatives like olive oil.

There are many seed oils, but the most common seed oils are:

Vegetable oil is typically a blend of one or more of these oils. People began using seed oil in the early twentieth century as an alternative to lard. Today they’re commonly used for baking, cooking and as an ingredient in processed foods. They remain popular because they’re affordable and a good source of antioxidants and vitamin E, and they can help lower cholesterol and blood sugar levels.

None of this sounds controversial. But it is.

How Seed Oils Are Processed

Part of the controversy revolves around how seed oils are created. Before discussing the manufacture of seed oils, it’s useful to look at how olive oil is made. Olive oil, which is held up is one of the healthiest oils, is typically made with a mix of ancient techniques and modern technology. Olives and pits are crushed into a paste to release oil, then slowly stirred with water so that the oil clumps. That’s how they’ve been processed for more than 1,000 years.

Modern producers do this in closed mixing chambers filled with inert gasses to reduce oxidation, which can change the flavor of the oil. They may also add a little heat to improve oil extraction. The subsequent oil is typically labeled extra virgin olive oil. It’s healthy, simply processed and four to five times the cost of canola and soy oils.

Extracting oil from seeds is different. Like olives, seeds are heated, milled, squeezed, heated and pummeled until the oil is extracted. But manufacturers also use the chemical solvent hexane to maximize the extracted oil. (Some olive oils actually use hexane, too, but these oils are not typically labeled extra virgin.) More on hexane in a moment.

Once extracted, manufacturers use other processes to enhance flavor, color and stability; water and organic acids may be used to remove fine meal particles and fats. The oil may be passed through filtration, a process that’s unfortunately called bleaching, though it does not involve bleach.

Although some seed oils are processed similarly to olive oil (and those that are expensive), most brands at the grocery store are created this way and are highly processed.

That doesn’t make them unsafe. In fact, the Food and Drug Administration considers them safe for human consumption and even allows some health claims. Canola oil, for example, is considered “healthy” because it is very low in saturated fat and high in monounsaturated fat. It also contains some omega 3 fats.

Opponents of the oils, however, often point to their highly processed nature and hexane as one of the reasons the oils should be avoided. Hexane is a solvent that is used to improve oil extraction in the manufacturing processed; most of it is removed by the time the oil reaches the store. Hexane is not harmless like the gasses used in olive oil production, but it has a very low toxicity. It’s been used for nearly a century to extract oil, and there is no evidence that it’s harmful in the trace amounts found in processed seed oils.

In fact, you probably ingest more hexane while pumping gasoline.

So, what’s the problem with seed oils?

But just because it’s not considered unsafe by the FDA, doesn’t mean that seed oils are “healthy.”

Seed oils may contribute to inflammation, raising the risk for various diseases and weight gain. However, healthy experts are really divided. One camp suggests you eliminate industrial seed oils from your diet, while the other believes there’s not enough evidence to support this suggestion.

Unsaturated fat also can be broken into two groups – trans and cis. Let’s start with trans fats and then we’ll tie everything back to seed oils.

Trans fats can be found in small amounts in animal products, but most often, they’re lab created. Manufacturers add hydrogen to an oil, solidifying it to make products like vegetable shortening and margarine. The process is called hydrogenation, and originally, hydrogenated fats were created to help us lower saturated fat consumption. However, over time, studies found that hydrogenated (or trans) fats are more harmful than saturated fats; they trigger inflammation, raising your risk for pain syndromes, asthma, cancer, heart disease, type 2 diabetes and certain types of arthritis.

Your body can produce omega-9 fatty acids. But you also can get these fats into your diet by eating nuts and nut oils.

However, your body cannot produce omega-3 or omega-6. These fats must come from foods. Examples include salmon, mackerel, sardines, chia seeds and walnuts for omega-3 and walnuts, sunflower seeds, almonds and corn oil for omega-6.

There should be a healthy balance between omega-3s and omega-6s. The ideal ratio of omega-3s to omega-6s is one to four. This means you should consume between 1.1 and 1.6 grams of omega-3s and up to 6.4 grams a day of omega-6s per day. The remainder of your fat consumption would be a combination of monounsaturated and saturated fats, according to The Dietary Guidelines for Americans 2020-2025.

Unfortunately, maintaining a healthy ratio is easier said than done. The typical Western diet has about 10 times more omega-6s than omega-3s. Most Americans are eating between 5 and 15 times the recommended amount of omega-6 fatty acids, according to a study published in Progress in Lipid Research. These extra omega-6s are coming from seed oils in processed foods. Processed foods comprise about 70 percent of the American diet and our consumption of ultra-processed foods continues rising.

Why aren’t these oils banned?

Because the actual health impact of trans fats, lipid peroxides and highly processed seed oils aren’t clear. In fact, some researchers reject concerns over the health of seed oils, claiming the studies that suggest seed oils may not be healthy were poorly conducted.

Don’t be. Nutrition science is often complicated and somewhat controversial. But there’s something to take from the controversy: Seed oils often end up in foods we should eat less of anyway, namely, fried and highly processed foods. Using them occasionally in home baked goods or other recipes is probably okay. If you are concerned about limiting your use, try these suggestions:

Don’t have a doctor? Consider partnering with an MDVIP-affiliated physician. They have time to really work with you and develop a wellness plan. Find a physician near you and begin your partnership in health »

Recent posts
How to Eat to Boost Your Immune System
Heavy Drinkers Beware: Alcohol May Shorten Your Life, Study Says
On a Plant-Based Diet? You May Need Some Animal-Based Foods for Bone Health
An Underactive Thyroid Has Ties to Dementia
5 Nutrition Tips to Help Lower the Risk for Depression and Anxiety
categories
Primary Care
Cardiovascular Diet
FIND A DOCTOR NEAR YOU
Physician Locator