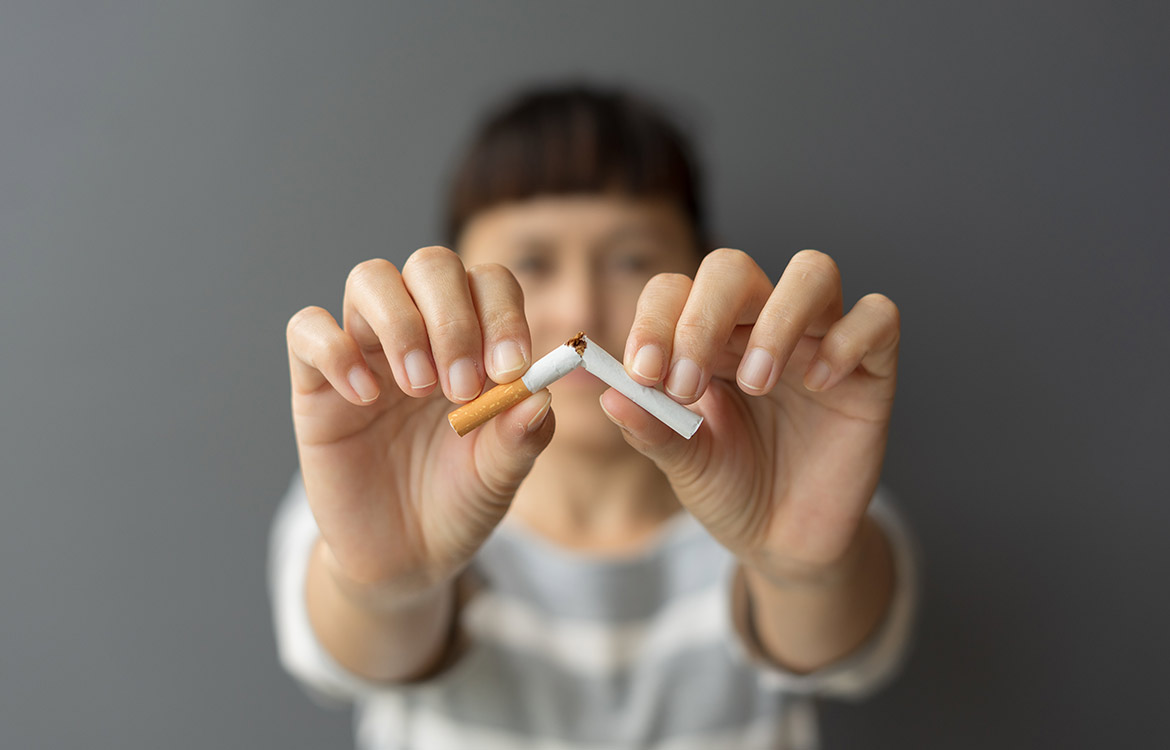 If you smoke, you already know it’s dangerous. It’s the leading cause of preventable disease and contributes to one of every five deaths in the United States every year, according to the U.S. Centers for Disease Control and Prevention (CDC). The real discussion is about quitting. About 70 percent of smokers would like to quit.

Why Do People Smoke?

About 90 percent of smoking adults began during adolescence. But there are distinct differences among the genders regarding their smoking habits.

A higher percentage of men than women smoke. Men tend to use (or at least try) different types of tobacco products like cigars and chewing tobacco. And most men began smoking for social reasons but continue because smoking activates the reward pathways of their brain.

Women, however, usually stick with cigarettes. Many begin smoking to help them manage their stress and weight. Of course, there may be some social influence involved, but they continue smoking to help them regulate emotional and mental health issues such as mood swings, stress, anxiety and depression.

Despite trying, about 85 percent of smokers resume smoking within a year. Keep in mind, quitting is no easy feat. Scientists compare quitting smoking with quitting cocaine or heroin.

Why? Tobacco plants contain nicotine, a very harmful, addictive chemical compound that can alter brain activity, causing cravings for more nicotine. Big tobacco genetically engineers their tobacco plants to have twice the amount of nicotine as naturally grown tobacco plants, according to the Truth Initiative. Additionally, tobacco manufacturers add ammonia to products, particularly cigarettes, to deliver nicotine to the brain within seconds, raising the risk for dependency. And some tobacco manufacturers added sugars, flavors and menthols to ease smoke inhalation and include additives that augment nicotine absorption.

This is why most smokers need many attempts at quitting before it sticks. The CDC suggests it takes between eight and 11 tries, while other health professionals believe it’s a little lower -- more like five to seven times.

Cold turkey is an effective method of quitting, but it’s extremely difficult. The American Lung Association along with many hospitals, universities and health departments offer smoking cessation programs. Nicotine replacement therapies and medications also are available and include:

Patch – is an over-the-counter NRT that slowly releases nicotine, providing an elevated dose of nicotine one to two hours after application, which tapers to provide a constant stream of low-level nicotine throughout the day. Usually, people begin with a 21 mg patch, then drop down to 14 mg and then 7 mg over 8 to 12 weeks. Skin irritation and vivid dreams are common side effects, requiring the patch to be rotated daily and removed before going to bed. It may be combined with short acting NRTs such as gum, nasal spray and lozenge.

Gum – is an over-the-counter NRT that can be used as a standalone NRT or combined with the patch to ease strong cravings. It’s available in two strengths – 2 mg and 4 mg – and has very specific instructions to follow. Typical side effects include tingling sensation in mouth, hiccups and nausea.

Lozenge – is like nicotine gum, in that it’s available over the counter, may be used as a standalone NRT or combined with a patch and comes in 2 mg and 4 mg strengths. You may experience nausea, headaches and hiccups.

Nasal spray – is a prescription only NRT. It reaches the brain quicker than other forms of NRT. Common side effects include nasal and sinus irritation and watery eyes; however, side effects often wane over time. It can be combined with other NRTs to help control intense cravings.

Oral inhaler – is available via prescription. Oral inhalers are cartridges that contain nicotine and menthol, and resemble cigarettes, allowing smokers to “smoke” their NRT. A cough and sore throat may develop. Oral inhalers can be used in conjunction with the patch.

Varenicline (brand name Chantix) binds to nicotine receptors in the brain. It doesn't activate the receptors as much as nicotine, just enough to relieve withdrawal symptoms, while blocking the appealing effects of nicotine if you begin smoking again. Common side effects include nausea, vomiting and insomnia, but it’s also possible to experience neuropsychiatric effects, that should be monitored during treatment.

Bupropion (brand names Zyban Wellbutrin) is a sustained release medication also used as an anti-depressant. It alters dopamine levels in the brain, easing nicotine withdrawal symptoms. Users sometimes complain about headache, insomnia and dry mouth. There’s also a very low risk of triggering a seizure, which means you should not take this medication if you have a seizure disorder. Chantrix can be used with NRTs.

Regardless of the resources available to smokers to quit, a handful of indicators can predict if a smoker will relapse – one of which is gender. Many studies suggest that women have a more difficult time quitting smoking than men. Here are five reasons why.

Studies have found that estrogen levels may affect the nicotine reward system. Near the midline on the floor of the midbrain is a group of neurons known as the ventral tegmental area (VTA). The VTA is the origin of dopamine pathways. Dopamine, a neurotransmitter, plays a role in the reward center of your brain, providing feelings of pleasure, motivation and satisfaction. This means that higher levels of circulating estrogen help women quit smoking.

However, nicotine binds to the enzyme responsible for estrogen production in the thalamus – the section of the brain with the most nicotine receptors. This lowers estrogen levels, making it more difficult to quit smoking. And if you do quit smoking, you are more likely to relapse, according to a very small study presented at the 35th European College of Neuropsychopharmacology annual conference in 2022.

“There are other studies that support this theory,” says Bernard Kaminetsky, MD, medical director, MDVIP. “If you’re a woman who’s going through perimenopause or has gone through menopause, talk to your doctor about hormonal replacement therapy, commonly referred to as HRT.”

Cigarette cravings are a common reason for people to continue smoking. Cravings are usually triggered by sensory cues and stress.

Studies show that women are more stressed than men. One reason is women tend to juggle work with more household chores and childcare responsibilities than men. Women also put on a “brave face” more often than men, according to the 2022 Women in the Workplace report. The technical term for this is emotional labor -- forced expression of optimism and calmness. And it takes a higher toll on women than men. The genders also experience and handle stressful events differently, causing women to feel more emotionally exhausted and have a higher risk for psychological problems, according to a survey published in Frontiers of Public Health.

“Unfortunately, stress is a part of everyday life. It’s another reason quitting smoking is so difficult,” says Kaminetsky. “Try relaxation techniques such as deep breathing, meditation, music and art therapy and aromatherapy. You also can talk to your primary care doctor. They may be able to provide tips, prescribe medication or refer you to a specialist.”

Weight control is common motive for women to begin smoking, making it a common barrier to quitting and/or reason for relapsing. However, studies suggest that most former smokers gain between 5 and 10 pounds and can lose the weight within the first year of quitting.

“Don’t let weight be a reason to continue smoking. If you’re concerned about weight gain, talk to your primary care physician,” says Kaminetsky. “They can counsel you on healthy weight management tactics, monitor and treat for issues known for causing weight gain like thyroid disease, type 2 diabetes and polycystic ovarian syndrome. They also can refer to you a dietician and appropriate fitness professional if need be.”

There’s a wide array of nicotine withdrawal symptoms. Cravings, insomnia, lack of focus and feelings of frustration, sadness, depression, restless, anxiety, jumpiness and hunger can be tough, in fact, very tough. Pharmacological treatments can help. And while women are more likely than men to seek medical help to quit smoking, they’re less likely to receive pharmacological treatments. But quitting success rates were lower among women who didn’t use pharmaceutical treatments, according to a study published in Nicotine Tobacco Research.

“If you’re in the process of quitting smoking, discuss nicotine replacement therapies and pharmacological treatments with your doctor, says Kaminetsky. “Smoking cessation is a very difficult journey; I encourage you to use any means at your disposable to help you permanently quit.”

Many long-term women smokers view smoking as part of their identity and life. After giving it up, they miss it and go back to it.

“Unfortunately, I’ve had patients give up cigarettes, get past cravings and withdrawals symptoms, and still return to smoking just because they missed it,” says Kaminetsky. “In such cases, I encourage women to think of all the variables that help define them and to focus on those, as opposed to simply being a smoker. Often, women need to change their daily routine, habits and place they frequent to help them redefine themselves as a non-smoker.”

If you smoke and are ready to quit, talk to your primary care doctor. They can provide cessation resources such as referrals to community programs and specialists, recommendations for NRT, prescriptions for pharmacological treatments and guidance on controlling your weight and stress.

Looking for a primary care physician? Consider partnering with an MDVIP-affiliated physician. An MDVIP-affiliated doctor can customize a wellness plan for you that can focus on living a smoke-free lifestyle. Find an MDVIP affiliate near you and begin your partnership in health »