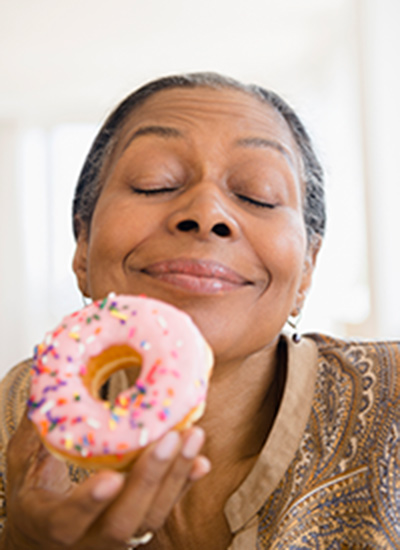 A sleepless night can leave you feeling groggy, fatigued, irritable – and apparently craving junk food, according to a new study published in eLife. This may not be news to you, if, after a night with little shut eye, you’ve yearned for high-fat, high-calorie foods like French fries, onion rings or donuts.

“Insomnia, sleep apnea and burning the candle at both ends are common causes of sleep deprivation,” says Bernard Kaminetsky, MD, medical director, MDVIP. “And it has ties to many health issues.”

For instance, weight gain has been linked to sleep deprivation for years. A lack of sleep suppresses leptin, a hormone that regulates fat storage and calories burned while triggering ghrelin, a hormone that drives hunger. And of course, exhaustion drains your motivation to exercise. But these cravings weren’t understood until Northwestern University researchers studied sense of smell.

Previous studies found a lack of sleep increases certain endocannabinoids, chemical compounds similar to cannabinoids (an active ingredient in cannabis), but produced by your body. Like cannabis in marijuana, endocannabinoids heighten sense of smell and boost appetite.

Researchers recruited 29 healthy, normal weight, non-smoking men and women ages 18 to 40 that regularly slept between seven and nine hours a night. They were divided into two groups. One group slept normally for four weeks and then was restricted to sleeping only four hours. The second group had the opposite sleep schedule. Participants followed a strict sleeping protocol to align their circadian rhythms and avoided daytime naps, night work, traveling across times zones, medications that affect sleep and caffeine beyond 300 mg/day.

Each morning participants were served a controlled breakfast, lunch and dinner and had access to a snack buffet. Food choices and amounts were tracked and blood levels of two endocannabinoid compounds were measured. Participants were also given an fMRI scan — which measures brain activity by sensing changes in blood flow — before the buffet to help researchers understand how the brain responds to different food odors.

The Effect of Sleep Deprivation on Weight

Researchers found sleep-deprived participants chose calorically dense foods such as potato chips, cookies and donuts and had higher levels of one endocannabinoid. They also noticed the parts of the brain responsible for sense of smell and receiving signals about food smell, taste and the amount of food in the stomach didn’t communicate well when that endocannabinoid was elevated. As a result, participants selected foods with more enticing smells, regardless of calories or nutrition.

“At this point, there isn’t a solution for craving high-fat and sugary foods when you’re overtired other than just avoiding them,” says Kaminetsky. “If you struggle with getting enough sleep on a regular basis, work with your doctor to try getting to the root of the problem.”

If you don’t have a doctor, consider partnering with an MDVIP-affiliated physician. MDVIP doctors have the time to work with you to help you sleep better and manage weight. Find a physician near you and begin your partnership in health »